Dysport is a newer botulinum toxin type A product on the market, and an FDA-approved competitive product for BOTOX. According to the American Society for Aesthetic Plastic Surgery, over 10 million cosmetic procedures continue to be performed yearly and nearly 85% of those continue to be non-surgical procedures like Dysport. Injections of botulinum toxin type A have been the number one non-surgical cosmetic procedure for the past eight years, with over 2.5 million total procedures last year. Dr. Rueckl performs Dysport treatments in his office daily and is one of the top injectors in Las Vegas.

For many years, Dr. Rueckl was the only injector at Lakes Dermatology. But after years of training them with his personal techniques and intricacies, Melanie Wade, BSN, RN, and Ross Davis, PA are both now injecting at our office as well.

What is Dysport and what does it do? 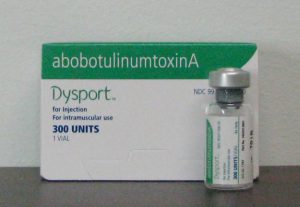 Dysport is a neuromuscular blocking toxin (abobotulinumtoxinA) which acts to block acetylcholine release at motor nerve ends, and reduce muscular spasm. Developed in the United Kingdom in the early ’90s, Dysport has been used for aesthetic treatments in 34 countries for over a decade and received FDA-approval in the U.S. in 2009. Until recently and the FDA-approval of Xeomin, Dysport was the only competitor for BOTOX on the market.

Dysport is used cosmetically to reduce the activity of the muscles that cause frown lines, crow’s feet, horizontal lines in the forehead, and the hard “11’s” between your brows. Dysport temporarily stops these muscles from contracting, which smooths the lines and wrinkles on your face. Dysport results typically last 3-4 months.

For more information on Dysport, including all FDA information and photo gallery of befores and afters, please visit the Galderma Dypsort website at www.dysportusa.com.

Where is Dysport used?

Dysport is used at our office for:

All Dysport injections are performed by Dr. Rueckl. At your first visit, you will meet with Dr. Rueckl and his assistant to discuss the treatment and sign a consent. Though the injections are not painful, patients have the option to apply a small amount of topical anesthetic cream to the injection sites and can also opt to have a machine that blows cold air used during the procedure.

Dr. Rueckl will administer the Dysport using a very small needle. He may have you raise and lower your eyebrows and wrinkle and crease your forehead so he can better determine the appropriate injection sites for the Dysport. The procedure takes less than 15 minutes to perform. If needed, you will be given small ice packs to apply post-treatment to lessen any possible bruising. Some patients experience small “bee stings” at each injection site, but these should dissipate within an hour. When you leave, you will have no downtime and can return to normal activities immediately. 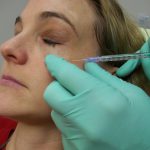 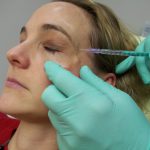 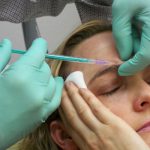 Similar to BOTOX, Dysport is charged and administered by “units”. However, “units” of BOTOX and Dysport are not 1:1 and it is a misnomer that Dysport treatments are cheaper than BOTOX treatments. The per-unit price for Dysport is cheaper, but a larger quantity of units is required for Dysport than for BOTOX. Thus, at Lakes Dermatology a full treatment of Dysport is 150 units; a partial treatment is 75 units. 75 units is most often used to treat only the “11’s”, the deep wrinkles between the brows. 150 units treats the forehead, between the brows, and the sides of each eye (crow’s feet). Nearly all patients opt for a full treatment.

What kind of results can I expect from a Dysport treatment?

Dysport results generally give one a relaxed and youthful appearance. Where the Dysport was administered, you can expect to see a smoothing of lines, and a loss of tension in those muscles. Results typically begin to appear within days and should be fully noticeable after 10 days. Touch-ups or additional Dysport will not be administered until 10 days have passed so full effects can take place. Patients who consistently receive Dysport may notice it takes a bit longer to “kick in” after each treatment. This is normal, but no additional injections should be done until the 10 days have passed. Dysport results last approximately 3-4 months.

How much does Dysport cost?

As stated, Dysport is charged in either 75 or 150 unit increments. For a full treatment where 150 units are used for the forehead, between the brows, and for the crow’s feet, the treatment cost is $600. To treat only the area between the brows using 75 units, the treatment cost is $325. Our patients always receive full strength Dysport, and continue to return to Dr. Rueckl for consistent results. 300u of Dysport is $1,100.

If you get Dysport regularly, make sure you sign up for Galderma’s Aspire program. By participating in this program you get points for each treatment which you can then deposit and redeem for discounts on future treatments and products from Galderma. For all of the details, please check out www.aspirerewards.com.

Dysport for hyperhidrosis requires 300u of Dysport. This is priced at a discounted rate of $1100.