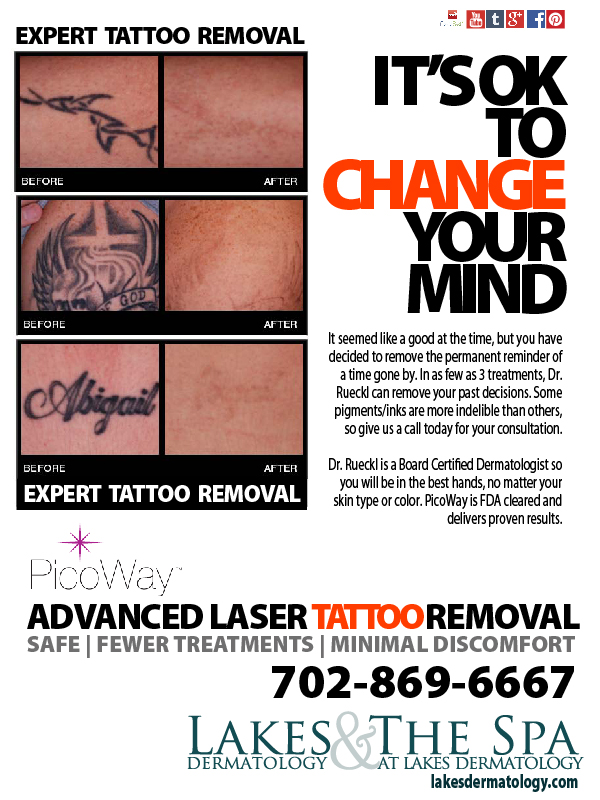 Once considered an identifying feature of various cultural sub-groups, such as sailors and carnival workers, tattoos have now gone mainstream. The last decade has seen an explosion of individuals getting tattoos as well as a societal shift in how people with tattoos are viewed. Now it seems that every pro athlete is showcasing a great deal of ink, and even suburban soccer moms can be seen sporting a tattoo or two. This rise in tattoo popularity can be seen by the fact that there are over 21,000 tattoo parlors in the United States. (1) Of course, one can often regret a choice made when one was younger, which has led to an increased demand as well for tattoo removal. Many licensed dermatologists, such as Dr. F. Victor Rueckl of Lakes Dermatology in Las Vegas, are thrilled with the new and innovative PicoWay laser treatment for removing unwanted tattoos.

It’s quite fascinating to see how popular tattoos have become. A total of 45 million Americans have at least one tattoo, and Americans spend $1.65 billion a year on getting tattoos. (2) Nearly half (47%) of Millennials have a tattoo, making them the largest sector of the population to do so, and there is virtually no difference of those of a particular political persuasion concerning having a tattoo. Overall, 27% of Republicans, 28% of Independents, and 29% of Democrats have ink adorning their bodies. (3) Experienced dermatologists, such as Dr. F. Victor Rueckl of Lakes Dermatology, know that many people eventually come to regret having a tattoo. A recent poll showed that 23% of those with a tattoo regret getting it. (4) The most common complaint is that people thought that they were too young when they got the tattoo, which was followed by the belief that the tattoo doesn’t fit their current lifestyle or personality. Another interesting fact is that women are twice as likely than men to have their tattoos removed. (5) 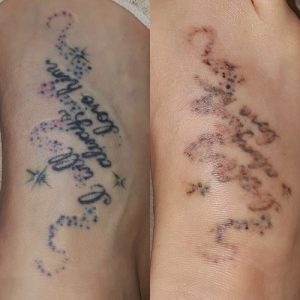 Fortunately for those seeking to have tattoos removed, there is a new treatment option now available: PicoWay. This advanced treatment offers a better solution for removing tattoos than traditional laser treatments. Getting rid of a tattoo was always a chore that was often unable to be fully realized. A tattoo is hard to remove due to the fact that the ink is injected into the dermis, below the skin, which makes it harder to remove. Then there’s the fact that traditional laser treatments have difficulty in removing certain colors, such as red and yellow. Medical professionals, such as Dr. F. Victor Rueckl of Lakes Dermatology in Las Vegas, have long used lasers to break down the ink particles into smaller sizes so that the body can then carry them away. The problem was that traditional laser treatments often left the remaining ink particles too big for the body to remove, thus leaving the remnants of the tattoo still visible.

However, PicoWay changes all of that. This advanced treatment is able to treat multi-colored tattoos on different skin types to tremendous effect. PicoWay uses a unique picosecond (one trillionth of a second) laser technology to target colors matching the specific laser wavelength. These ultra-short pulses break down the tattoo into very tiny particles, no matter their color or original ink particle size. The body then uses its normal processes to dispose of the ink particles. One aspect of the new PicoWay treatment that has dermatologists, such as Dr. F. Victor Rueckl of Lakes Dermatology, happy is that this new treatment generates less heat energy than traditional laser treatments, which means that the patient experiences far less discomfort than they would have using older laser treatments. While patients will need to have multiple sessions to get rid of their tattoos via PicoWay, they should start to see results after the first treatment session.

Of the new PicoWay laser treatment system, Dr. F. Victor Rueckl of Lakes Dermatology in Las Vegas says, “The new PicoWay treatment marks a tremendous leap forward in helping people get rid of unwanted tattoos. My clinic has recently installed the PicoWay laser device, and the patients I have treated with it are extremely happy with the results they have achieved thus far. Unlike older laser treatments, PicoWay works on all the colors found in tattoos and there is minimal discomfort due to the device’s generation of less heat. Plus, PicoWay works on all skin types, including dark skin, which older laser treatments had a great deal of trouble with. Patients should start to see an improvement after the first use of PicoWay, and an entire session only lasts twenty minutes at most, which means a patient could schedule an appointment during their lunch break and then go back to work. PicoWay is also an exceptional treatment option for pigmentation and skin irregularities, such as pigmented lesions. If you had trouble getting a tattoo dedicated to an ex-girlfriend removed, you can now make your current girlfriend happy as PicoWay can safely and comfortably get rid of that unwanted reminder of your romantic past.” (6)

Just like any popular trend, such as getting acid-washed jeans or having a mullet, there comes a time when people begin to regret getting a tattoo when they were younger. A sleeve of flaming skulls might not be the right fit for the corporate boardroom or a shift in military policy on tattoos may dictate the necessity of having some removed. Older laser treatments could help minimize the appearance of tattoos, but there were always issues with certain colors and larger ink particle sizes. The advanced PicoWay device offers experienced dermatologists, such as Dr. F. Victor Rueckl of Lakes Dermatology, a new way to comfortably and safely remove all types of tattoos from different skin types. PicoWay has been FDA-cleared and delivers proven results that can literally wipe away a mistake of one’s youth.