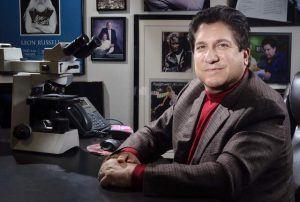 By LINDA J. SIMPSON
SPECIAL TO THE LAS VEGAS REVIEW-JOURNAL

Eczema has been called “the itch that rashes.”

The terms eczema and dermatitis are often used interchangeably to describe a reaction pattern of the skin that creates itching, redness and rashes. There are different types of eczema. Many people are familiar with the contact dermatitis rash that appears when they get too close to such things as poison ivy or certain chemicals. But for the more that 30 million people in the United States who are afflicted with atopic dermatitis, also called atopic eczema, a rash is more than a rash. It is the most common type of eczema, affecting 1 in 5 infants and young children, according to the National Institutes of Health.

The saying, “The best thing you can do for your health is pick your ancestors,” rings true when it comes to this type of eczema.

Atopic eczema is an inherited tendency. It is not contagious. If one of your parents has an atopic (atypical) disorder such as asthma, allergies or eczema, the chances are about 50 percent that you will have one or more of the diseases, say experts at the NIH. There is even a name for this genetic combination: the atopic march or atopic triad.

Dr. Anita Henderson, chief of pediatrics for Southwest Medical Associates, describes the atopic march as a type of progression.

“It doesn’t happen with all kids. The majority don’t go through this but there is this tendency for one to beget the other,” she says.

Some infants start with a rash on their face or scalp. As they get older they may have intermittent skin flare-ups on their extremities, trunk, face and neck. They may also develop seasonal allergies such as hay fever. Some children go on to develop asthma.

According to the National Eczema Association website, patients with eczema, asthma and/or allergies are born with overreactive inflammatory cells in the skin. When something triggers them, they don’t turn off as they should.

“They basically got the wrong genetic card,” says local dermatologist, Dr. James Del Rosso. “It’s a chronic recurring problem that you’ve inherited that tendency and it started in infancy or very early in childhood.”

In a person without eczema, the skin acts like a wall to keep out dirt, chemicals and invaders, such as allergens, bacteria and viruses. The skin cells are the blocks of the wall and our natural occurring lipids are the cement holding skin cells together. The wall enables the skin to retain moisture and prevent foreign matter from entering.

Eczema patients are deficient in the natural occurring lipids (cement) that hold the skin cells together, which results in dry skin and a vulnerability to invaders.

“They lose water from their skin probably twofold more than anybody else when their skin looks normal,” Del Rosso says. “When their skin is normal, it is baseline abnormal.”

Nowadays, the first place people might turn to for a medical diagnosis of a rash is the Internet. Searching for an image that looks like the one on their body, they can often reach an inaccurate conclusion.

“When you go to the Internet, my feeling is unless the Internet is somebody you can make an appointment with and is going to take medical and legal responsibility — that’s not the place to be getting your diagnosis,” Del Rosso says. “You wouldn’t fix the electrical system in your house unless you were an electrician. Why would you play games with your health?”

Experts agree that eczema presents differently in different people. Sometimes an eczema outbreak may also have a secondary infection component, either bacterial or fungal in nature, which requires different treatment approaches.

“There’s no one treatment,” Del Rosso notes. “It depends on what the patient has — the severity — the body location — what they’ve used before — what they are sensitive to. You can’t go to a website and figure out what you need because it may not apply to you.”

Del Rosso is the principal investigator and research director of the Del Rosso Dermatology Research Center, which currently is conducting about 15 local clinical trials on a wide range of skin conditions.

Eczema can look different at different stages of your life.

“It looks different in an infant compared to an older child or an adult,” says Henderson, the pediatrician.

“Nothing happened until I got old,” says Cooley, a retired American Airlines flight attendant.

She never had asthma and only was allergic to wool as a child. In 2004, she developed seasonal allergies and eczema presented with dry, itchy scaly spots on her arms and legs.

“I went to the dermatologist and he gave me this medication (a topical corticosteroid) to put on because of all the little bumps,” Cooley says. “He told me not to put it on too many nights, because if I did my skin would get real thin.”

The former Anthem Jazz dancer says she now uses the corticosteroid to control the itching only when the eczema gets severe.

Even though topical corticosteroids have been the first line of treatment for eczema for decades and have minimal risks when used in the prescribed manner, they are not without side effects.

“You want to use the lowest potency for the shortest amount of time,” Henderson says. “Chronic steroid use, even though it may dramatically improve their skin, can lead to too much systemic absorption of steroids and ultimately can cause thinning of the skin.”

Don’t self-diagnose a rash that doesn’t go away after a short time with the use of over-the-counter remedies — it may not be what you think it is, say the experts. Eczema and psoriasis are often confused by the layperson and they require different medications.

“Just getting that current eruption under control is not learning how to maintain your skin on an everyday basis for the rest of your life,” Del Rosso adds.

Your doctor can help you devise a daily skin maintenance plan to retain your skin’s moisture and identify triggers that cause eczema flare-ups.

Henderson hears from parents who feel certain foods are the cause of their child’s eczema.

“Granted, some food allergies might make eczema worse or the flare-ups worse, but it is not necessarily the cause of atopic dermatitis,” Henderson says.

“I just don’t want people to be eliminating all these nutritious foods from their (children’s) diet because they think it is making their eczema worse,” Henderson adds. “Especially if the child is an infant, we want optimal brain development — we want optimal growth. Be very careful of the overly restrictive diet.”